After dropping Game One of their opening best-of-seven series against the Frankford Huskies, the Picton Pirates can punch their ticket to the second round of the Provincial Junior Hockey League Schmalz Cup playoffs with a win on home ice Thursday.

The Huskies, with a single win to their credit in their first season of PJHL play, didn’t wait to long to pick up their first ever playoff win, shocking the Pirates on home ice March 10, taking Game One 4-3.

Put to the test and needing a response, the locals bounced back to take Games 2, 3, and 4 to take a strangle hold on the series. 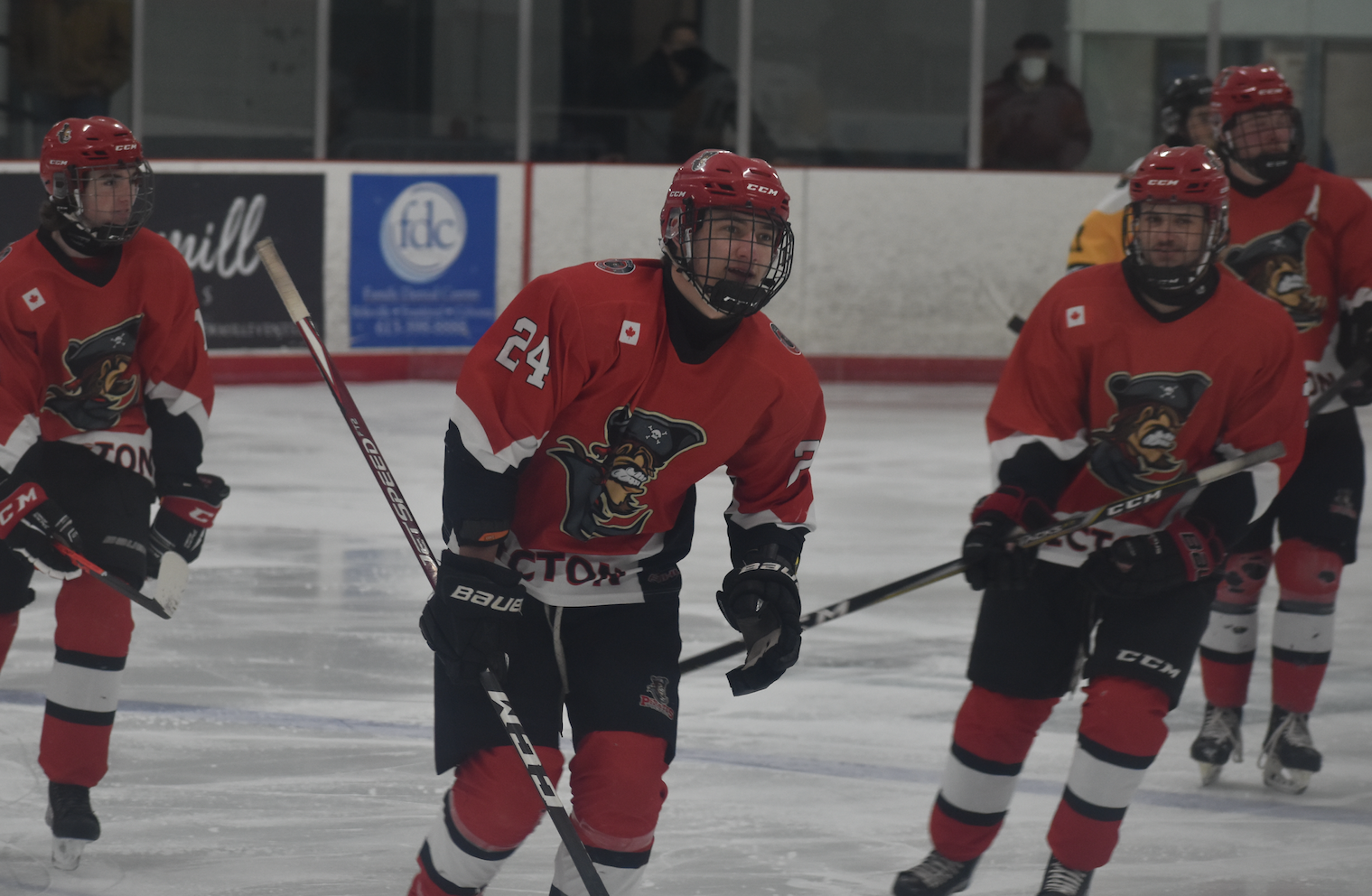 Picton’s latest win might have been the club’s most physical effort in a number of seasons and was certainly the most complete game the team has played in the 2022 post season.

Looking to push the Huskies to the brink of elimination, the Pirates built leads of 2-0 and 4-0 through the first and second periods in Frankford Monday night en route to a 6-2 win.

“We were looking for a complete effort and that’s what we came with,” Pirates General Manager Jason Parks said.

Picton’s Ian Harrison and Reese Hancock were on the giving end of a bevy of heavy hits in the second and third period of Game 4.

Picton opened the scoring for the fourth straight game when Noah Brant spotted Cole Lavender cruising through the high slot to finish off a smart passing play starter by County Kings call up Gerrit Kempers at 6:13. Just over two minutes later and on a power play, Brant would rip his fourth of the series to push the locals ahead 2-0.

In the second, some nice forechecking below the Frankford goal line allowed Landon McLellan to capitalize and bulge the twine at 1:50 with the goal that would stand up as the game winner.

Later in the frame, Jack Dow shovelled home a loose puck from the slot to make it 4-0.

Frankford would finally get on the board in the third as Mike Dolton set up another Kings call up Riley Grimmon. Grimmon ruined Nolan Lane’s shutout bid with a nicely placed wrist shot at 4:58 of the third and so far through four games, Kings call ups Kempers, Grimmon and Ben Smith have accounted for six points.

“The way they’ve come in and impacted the series on both sides is a credit to the Prince Edward County Minor Hockey Association and their focus on development,” Parks added. “Clearly there are prospects in the system that are looking beyond minor hockey in the coming years and that’s a good thing.”

Picton got the Grimmon goal back midway through the period when Kings alumnus Lavender went bar down behind Huskies goalie Hayden Candler at 11:03. The Pirates would bag their second power play tally of the night just over a minute later when Owen Dever banged home his of the series.

Dylan Foster would respond for the Huskies at 13:19 but that was all the home side could generate in the third game in three nights for both squads.

In Picton for Game 3 Sunday, the Huskies hung around the Pirates for the better part of two periods thanks to some stellar goaltending by Cameron Airhart.

Brant would beat Airhart with 45 seconds left in the first off a face-off play thanks to a nice win by McLellan.

But at the end of the second, it was the Huskies drawing even with 45 seconds left as Grimmon would set up Dolton in front to square the affair at 1-1.

Early in the third, Picton made sure they would have some room to work with down the stretch as the Pirates scored twice in under four minutes to open the frame. McLellan’s first of the series was the game winner as he tipped Lavender’s point shot past Airhart 1:49 into the third.

At the 3:47 mark of the frame, Picton’s Derrick Vos made an impactful return to the Pirates line up as he ripped a point shot past Airhart at the 3:47 mark.

In the late stages of the game, Brant picked up his second of the game into a vacated Frankford cage.

The Tyendinaga resident factored into all four Picton tallies and Owen Willis made 23 saves in the Pirates net for his second win of the series.

“Noah’s really stepped up and made this series his own,” Parks added. “He’s been phenomenal in all three zones for us. He’s playing the strongest 200 ft game I’ve ever seen and he’s a threat to score every trip into the offensive zone.”

In Game Two on Saturday, facing a one game deficit, the Pirates got contributions from all over the lineup as they skated away from the home side Huskies 6-1.

Defencemen Ryan Bauder and Trot Davis both tallied in the first to push the guests ahead 2-0 through 20 minutes with Smith setting up the game’s first goal.

In the second, Picton was the only team to score and it was Cole Stevenson slipping a backhand between the legs of Candler at the 14:21 mark of the second.

In the third, the Pirates capitalized on the powerplay early as McLellan ripped a top shelf effort at 1:14.

The Huskies responded at 11:56 when Hunter Cooney managed to slip a puck past Willis at the 11:56 mark to get the score to 4-1.

But the Pirates had the legs at the end of the contest and it was Kempers sending the puck into a yawning cage 16:28 for his first PJHL goal.

The Ameliasburgh native didn’t wait long to score his second as the AP put a stick on Zack Brooks’ shot from the half wall and tipped it past Candler with 20 seconds left to make it a 6-1 final.

“Gerrit works hard, doesn’t take anything for granted and always has a smile on his face,” said the GM. “He’s a guy that’s got a taste of junior hockey and I think he wants more.”

In Game 1, Picton’s Brant opened the scoring early on the powerplay but Cooney scored a powerplay goal of his own in the late stages.

The teams traded goals in the third with Curtis Dicks giving the Huskies a lead at 4:13 before Dow jammed home an equalizer at 9:10. Caleb Summerfeldt would push the Huskies ahead with just over five minutes left.

In the third, the visitors would get some insurance as Slone Maguire’s shot took a happy bounce off the Picton boards and slipped past Lane. Stevenson’s first of the series with 4:52 left gave Picton a glimmer but the locals couldn’t beat Candler, losing 4-3.

If Necessary, Game 6 will be in Frankford on Saturday and Game 7 in Picton on Sunday. In the other Tod Division series, Port Hope bested Campbellford in five games with four of them going to overtime. -Staff