It was a five game series loss that didn’t feel as lopsided as the results indicated.

The Picton Pirates pushed and prodded the Napanee Raiders through five hard fought games that were relatively close save the first period of Game One.

Picton’s dreams of playing for a Tod Division title died in Game Five in Napanee on Tuesday whilst in overtime.

A rising power play point shot from Raiders rearguard Noah Westwater hit the glass behind Picton starter Nolan Lane. As was the case with several  Napanee tallies in the series, a bounding puck would wind up in the blue paint where Chris Edwards had two or three whacks at the disc at 5:59 of the extra session. A follow up effort was the dagger that allowed a relieved Napanee squad move on and Picton to face another series where they were unable to best their Skyway Bridge rivals.

Picton Head Coach Kyle Hawkins-Schulz said there wasn’t much difference between the two clubs through the fifth game.

“The series score was 12-8 if you take away the first period of Game 1 and it’s tough for this group to be that close and not see the series go longer,” the coach said. “The guys really came to play and gave it their all. The bounces just didn’t go our way.”

Picton’s overage group of Noah Brant, Devin Morrison, Owen Dever and Nate Boomhower all went out on their proverbial shields in the series.

The club’s captain played well beyond his stature, giving Picton a little bit of everything in the 2022 playoffs while Brant was both hard on the forecheck and the score sheet.

Dever had several chances for big goals in the series but his hot stick finally ran cold for a spell.

Boomhower, felled by a sprained ankle at the end of the Frankford series, was only about 50 per cent in the games he was able to dress for but the hulking right winger offered a chapter in courage in preparing with trainer Lindsay Stakes before the game and heading into battle.

“My heart always bleeds for the overage guys at the end of any year but this was especially tough,” Pirates General Manager Jason Parks said. “These guys wore the Picton colours with pride for years and I told them the pain of this series loss shouldn’t diminish so many positive memories they’ve experienced together this season and the previous ones.”

After a scoreless first, it was the Pirates getting on the board early in the second as Morrison managed a touch in the crease off a Dever pass at 2:37 to make it 1-0.

At the midway point of the frame, Cameron Krupa was able to tie it from the high slot thanks to a miscue in the Picton end to put the score to 1-1 after 40 minutes. The Pirates had a number of posts in the stanza including a Cole Stevenson high zone tip that Bailey Maracle still hasn’t seen and a Brant volley from the slot that hit the pipe flush and bounced away.

The clubs would draw in the third as well.

Ben Chubbs was able to tuck home a loose puck at 8:56 to give the hosts a momentary lead but Brant picked up his second point of the night just over a minute later as his shot along the ice went between the wickets of Maracle.

In Game Four on Sunday, March 27 in front of the largest home crowd of the season, the Pirates were forced to chase the game after Westwater would open the scoring with a power play goal at the 3:17 mark of the first.

In front of a season high 516 fans at the Strathcona Paper Centre, Picton would win their only game of the series in Game 3 in Napanee a night prior.

Blueliner Hunter Matthysse converted a McLellan rebound with a hard slap shot that handcuffed Maracle at 6:20.

Later in the period, Brant got on the scoresheet with a wrist shot from inside the blue line that was set up by Morrison. 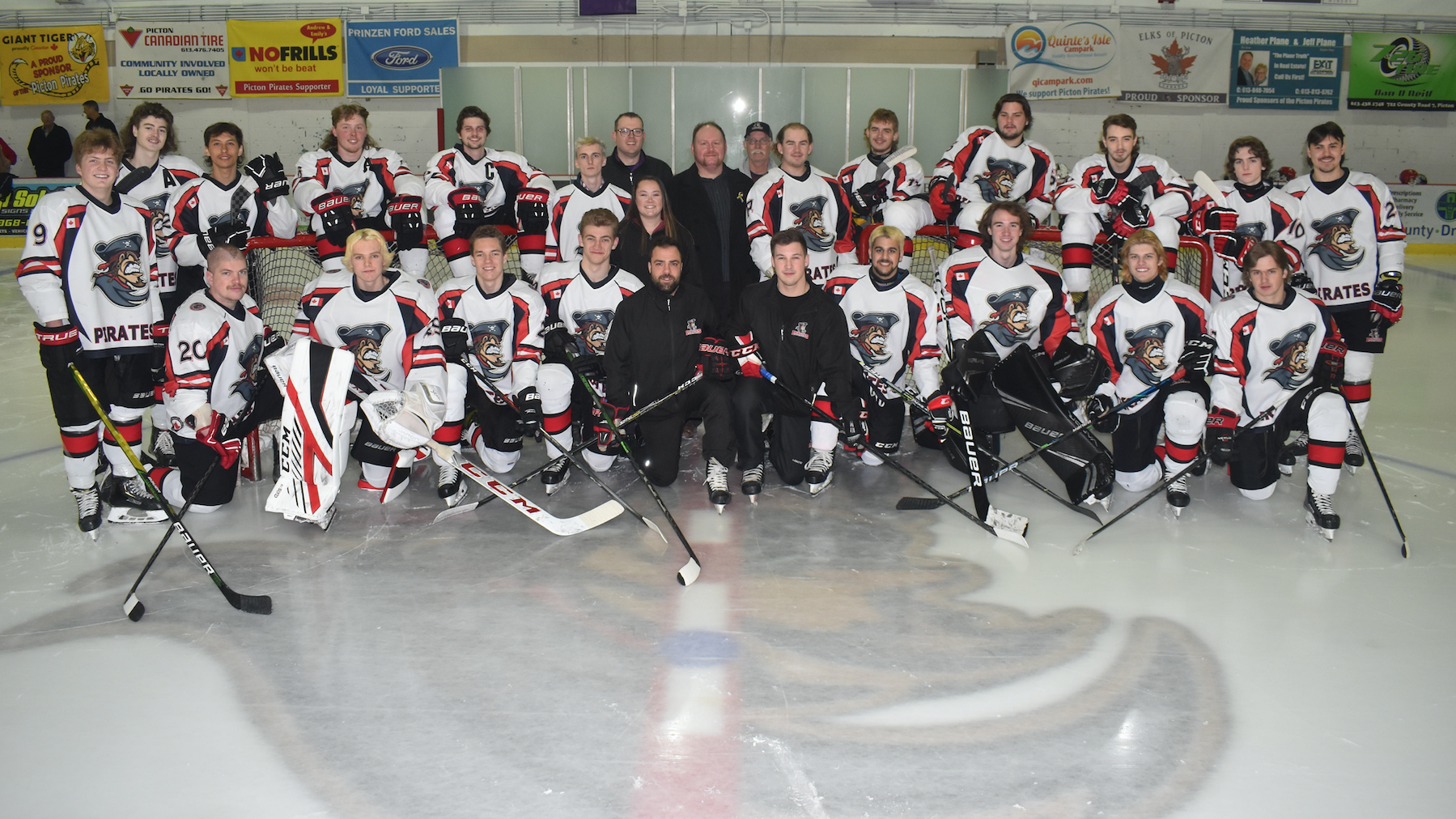 Down 2-0, the Raiders had a couple of early strikes that tied the game.

McCoy jumped into the offensive zone and managed to push a bouncing puck past Lane at 3:04 in the second.

Just over three minutes later, it was fellow blue liner Westwater keeping on a 2-on-1 and placing a perfect shot over a diving Pirates defender and beating Nolan Lane at the 6:14 mark.

Surrendering a pair of quick goals was the only miscue for the 17-year-old Wellington product who made 38 stops in the game.

“Nolan has developed so much this season and even in the playoffs he was learning and growing. On the road, in a tough situation giving up the lead, he showed tons of resolve,” Parks noted. “He’s the best 17-year-old in the Tod Division in my opinion and he added another layer to his body of work in this series.”

Tied at 2-2, Picton would push ahead lead in the third when Jack Dow managed to bat home the game winner on the power play with under six minutes left thanks to helpers from McLellan and Nick Kirby.

Ahead by one, Brant sealed the win with an air mail shot from his own end into an abandoned Napanee net with 34 seconds left on the clock.

To man, everyone exiting the rink on Thursday, March 24 would admit Picton outplayed Napanee but couldn’t manage to solve Maracle.

Napanee’s Logan White would score a power play goal with just under four minutes to go in the first period and from that point, Willis was stellar in the Picton net.

Unfortunately , Maracle went save-for-save with the Toronto product. The Pirates generated 10 shots in the third period including a few in tight that were gobbled up by the Raider net minder.

With Willis on the bench in the late going, Ben White was able to shovel a puck into an empty Pirates net to solve Game 2.

“A lot of people that watched that game said we were the better team for most of the second and all of the third but hats off to Bailey Maracle and his effort. He just stole the game from us,” Parks said.

Game 1 saw the Pirates spend the opening 20 minutes trying to figure out the Raiders and regulation ice. After a five game set in the cozy Huff Estates arena and the even smaller Frankford Arena, the locals looked like they were on pause while the Raiders potted three including wrap around goals by Ben and Logan White.

Napanee’s Soren Zamuner would add a power play goal in the third while Dow tallied a man advantage marker with under four minutes left in the game as the Raiders skated off with a 4-1 win.

Napanee will play Amherstview in the Tod Division finals. The Jets swept away the Port Hope Panthers in four games.

As for Picton, the  end of the 2022 playoffs means the club’s braintrust is already preparing for the 2022-23 PJHL season.

The club will be hosting a series of mini-camp skates in the evening at Lehigh Arena in May.

“Luckily we’ve had some tremendous scouting reports from the EMOHL as well as the Quinte and Kingston AAA programs and we are really looking at prospects to fill out the line up next season. Losing offensive in Boomhower, Brant, Dever and Morisson means we need to get young and develop our own solutions. There is really great opportunities for younger players that can produce points to come in, make their mark and possible use our club as a stepping stone to Jr. A programs,” Parks added.