The fourth time ended up being the charm for the Picton Pirates when it came to downing the Tod Division leaders and busting the 16 game winning streak of the Napanee Raiders.

Leading their arch rival in the third period of the proceeding three games only to come away empty handed, the Pirates finally pushed through on Friday night at the Strathcona Paper Centre, shading the hosts 3-2.

The win put Picton on a three game winning streak of its own. To their credit, the Pirates staved off the Raiders after besting the visiting Campbellford Rebels 4-1 the evening prior at Huff Estates Arena.

Picton’s captain Landon McLellan said it was a determined bunch on the Pirates bench in the third period as the teams traded goals.

“Everyone bought in and we had good discipline in the third period,” McLellan said. We were able to cut down on the little mistakes and control what we could control down the stretch.”

Picton moved their record to 9-6-0 on the season and may have planted a seed of doubt in the minds of the Raiders as Napanee went on to lose their second straight on Grey Cup Sunday at Amherstview where the Jets handed the visitors a 7-4 setback.

On Friday, it was the Raiders taking the lead in the second period when Adam Nutall tipped a Ryan Kidd shot past Picton starter Ethan Beattie at the 8:35 mark.

Picton, who was outshooting the Raiders at the time, didn’t have to wait too long for an opportunity to square the affair however as a misplayed puck off the stick on Napanee net minder Bailey Maracle was knocked down in the high slot by Ross Maycock.

The Picton native had nothing else to do but collect the disc and fire a slap shot into the vacated Raiders net at 9:22 to make it a 1-1 contest.

Picton kept the pressure up on the Raiders and just over a minute later, Jack Dow benefitted from some excellent work by winger Zack Brooks. The Frankford natives combined on a nice play with Dow sweeping the puck underneath Maracle at 10:43 to give the locals their first lead of the game.

This put Picton in familiar territory-a lead in the third against the division leaders for the fourth time in as many games.

The Pirates increased their odds at the 6:17 mark of the final frame when Ian Harrison jammed home his sixth of the year off a Dow rebound to make it 3-1 but Picton would still face adversity down the stretch.

Napanee’s Ben White would take a four minute minor for spearing just after the Harrison tally but it was Napanee’s Cameron Krupa would would benefit off some sloppy play between Beattie and Maycock behind the Picton goal line and a shorthanded tally would bring the score to 3-2.

If Picton felt that familiar sinking feeling after the Krupa goal, it didn’t show. 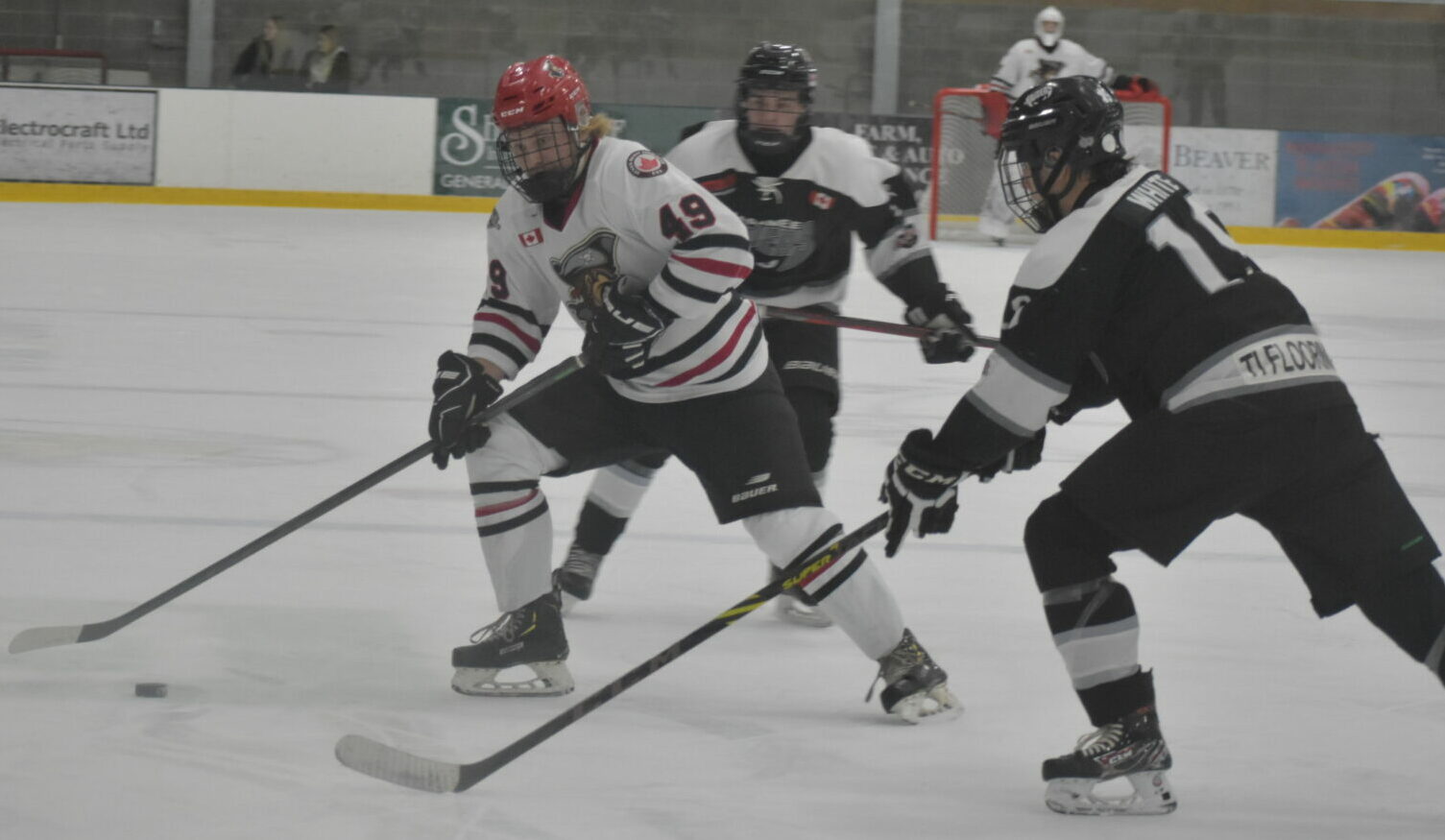 In the late going Napanee would press to force overtime but Beattie came up big for the Pirates.

“Beattie was awesome again tonight and he’s been great since coming in, It’s great not to have a back up, with Ethan and Brady Spry we’ve got 1a and 1 b and we can trust either of them in any situation,” McLellan added.

Picton held the advantage in shots through two periods 23-15 and Beattie came up with 11 big saves to preserve Picton’s ninth win of the season.

On Thursday, the Pirates had Spry in net and needed a couple of big saves down the stretch to keep a win over the visiting Rebels.

Picton had the ice breaker at the 16:08 mark when Harrison and Cole Lavender, fresh from the Wellington Dukes, set up Maycock on the power play to give Picton a 1-0 lead.

Just under two minutes later, Mclellan beat Campbellford starter Brayden Friedrich to the far post on a wrap around effort to stake the hosts to a 2-0 advantage.

But the Rebels would strike back and captain Aiden Treverton managed to capitalize off a scramble in front of Spry and carve the Picton lead in half with 40 seconds left in the frame.

A scoreless second in which Campbellford out shot Picton 11-8 saw the Pirates lean on Spry but it was a reversal of fortune in the third.

Picton would fire 22 pucks at the Rebels net in the final stanza and it was one of the first volleys that was key in the Pirates victory.

Blue liner Trot Davis’ first of the campaign set up by Brooks 41 seconds into the period which moved the margin to 3-1 in favour of the hosts.

The Campbellford Rebels would have a push back later in the third when Owen Findlay’s one time pass to Trevorton wound up in the Picton net at 10:46 to make it a one goal lead in the final ten minutes of the contest.

But Picton’s Cole Stevenson would out race a Rebels skater in the last 30 seconds to put home an empty netter to seal the win for Picton.

The Pirates host the Port Hope Panthers on Thursday and then travel to Amherstview on Sunday evening to wrap up their November schedule.

On other news, the PJHL postponed the 2022 Prospects Even in Grimsby due to snow storms pounding the Niagara peninsula. Beattie, Liam Philip and Gerrit Kempers along with the Picton staff will be part of the make up game when it’s announced later this month.